Recently, I had the unique opportunity to tour Midwest Groundcovers (St. Charles, IL) and Midwest Trading (Virgil, IL). I've been purchasing plants for my customers from Midwest Groundcovers, so I was excited to get the behind-the-scenes tour of both companies. Unfortunately, I forgot my the memory card for my camera at home (Grrrr!) and did not get any pics of the St. Charles facility. The Virgil operation, however, was equally as fascinating with it's 3.8 million (yes, I said "million") plants. Come along with me on the tour!

Posted by Unknown at 9:00 AM No comments: 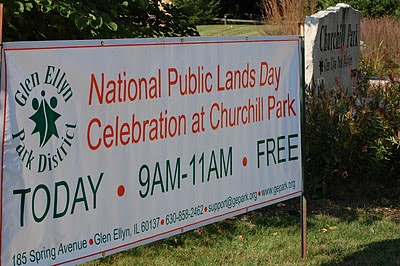 Mike Nowak, of "The Mike Nowak Show" which airs on WCPT Radio, spoke to the group of about 50 volunteers about the importance of green space. Then we were off - to collect seeds from the native plants in the prairie, plant trees, and mulch trails. I brought my daughter along because I think it's important to teach her the value of our environment and how important it is to care for it, and the benefits of volunteering. She had lots of fun collecting bouteloua curtipendula (side-oats grama) seeds until the donut holes became more alluring. The seeds collected from the prairie will be used to seed other areas in the Village, and for educational purposes.

Glen Ellyn holds monthly Churchill Park Restoration Work Days and is always looking for volunteers. I have to say, this was some of the best volunteering I've ever done. I could hardly call it "work" - being outside on a beautiful breezy day, losing myself in the task at hand, and feeling the peace of the prairie.

Posted by Unknown at 8:45 AM No comments:

A fun gardening blog that you should check out is Gardening Gone Wild. Produced by four leading garden writers and photographers, Fran Sorin, Saxon Holt, Debra Lee Baldwin, and Noel Kingsbury, GGW always has something to teach me.

One feature I love reading is the monthly Picture This Photo Contest. Well, this time I'm actually jumping in and participating. While I did sell my first garden photograph this week (woohoo!) I know I still have a lot to learn about garden photography. My competition in this contest (of which there are no prizes, just bragging rights) are likely very well-established photographers. But hey, life is about taking chances, right?

September's contest theme is the late summer garden, and I chose a picture that I shot at Churchill Park in Glen Ellyn during the National Public Lands Day Celebration this morning (look for a post about that on Monday). For me, seed heads hold a silent kind of beauty, and a bit of sadness at the ending of summer. I hope I captured that in the shot. 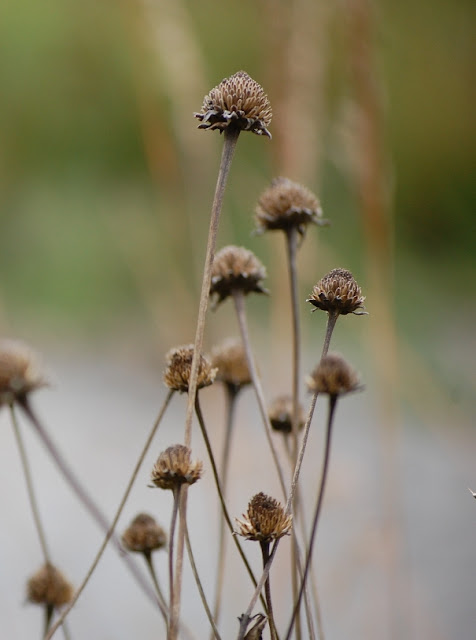 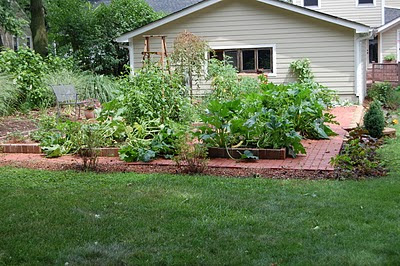 It's been a fantastic year in the potager. I planted a little late this year because the potager was being built, and most of my seedlings dampened off, but it turned out to be a success anyway. Or at least a learning year! Here's what I grew, and what I learned.

1. Zucchini. I learned the average family does not need eight plants. Yes, I had eight. Four traditional, and four of the Eight-Ball variety. I donated a lot of these to my local food pantry, ate a bunch, froze a lot, and passed them off to anyone who would take them. Zucchini overload! 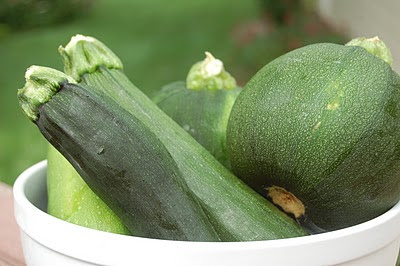 2. Sweet peppers. I grew six plants which resulted in a total of about 15 peppers. Next year I will reduce the quantity to make room for other vegetables. Or I may try an organic fertilizer on them (now I only use compost).

3. Hot peppers. I grew eight plants, and got lots of Thai Dragon and other little red hot babies. Only a few yellow cayenne, and about 10 jalapenos.

4. Cucumbers. Three plants yeilded...well...too many for my family to eat. And since you can't do anything to preserve them but pickling, I donated lots of these too. Will reduce to just one plant.

5. Tomatoes. I grew six plants, which all did well. Yellow Taxi and Green Zebra ripened way before the red varieties, so I will definitely repeat those and enjoy the early yeild again next year. My Early Girls and cherry varieties are still producing, so we've been eating fresh tomatoes since June! My tomato cages all bent over due to the heavy weight when in fruit, and a couple of violent storms that ripped through. An old ladder helped, but I'll have to come up with a better solution for next year. 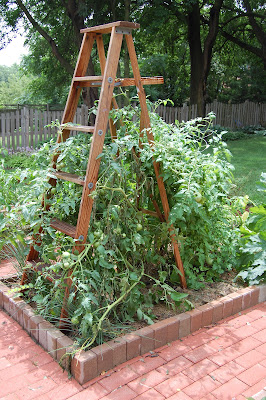 6. Blueberries. I lost two of my three plants, not sure why. I'd amended the soil with sulfer, peat moss, and pine needles to lower the pH like they require, but alas, they still died. The one bush that remains is growing well. I know they won't be mature and offer much for about four years or so, so I am being patient.

7. Strawberries. These did well, and we actually did eat some before the birds did!

8. Herbs. I made lots of pesto this year and threw chives in just about everything. I'm currently drying rosemary and sage for the cold months. I loved growing fresh herbs this year, something that I wasn't able to do in the past due to lack of garden space. 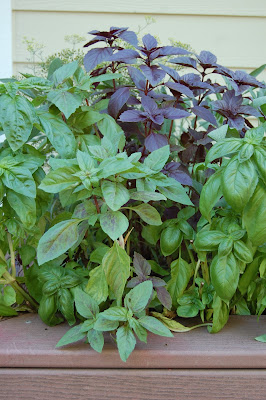 9. Leeks. These are still in the ground, waiting for me to cook them up in a potato leek soup!
10. Green beans. Two large harvests - one from my front yard trellis, and one in the potager. Delish!

11. Greens. LOVE growing Swiss chard. It just keeps coming back! I wonder how long into fall and winter I can keep them going. I've already frozen a bunch and try to work it into meals every week. We're having Salmon and Swiss Chard Quiche again this week! I've got kale, pak choi, and spinach seedlings in the garden right now, and with the help of cold frames (that my hubby has yet to build, hint, hint!) I hope to keep growing through the fall and harvesting through the winter.

So, with the reduction of zucchini next year, I plan to add more heirloom tomatoes, a rhubarb plant, and asparagus. I'll also include more annuals. While nasturtium is touted as a "must-have" for the potager, I found it to be lackluster. I want to include some annuals that burst with color and attract lots of pollinators.

Post Produce Day is hosted by Daniel Gasteiger at Your Small Kitchen Garden. Check out his blog to see what other veggie gardeners grew this year!

Over 2 million pounds of nursery pots are made for the garden industry each year and many of them are not recycled. Why? Because in order to grow healthy new plants inside, they have to be sterile, and sterilizing them is expensive for garden centers. However, there are many ways that you can reuse and repurpose these plastic pots and keep them out of the landfill.

1. Bring them back to your garden center. Check first to see if they will take them back for recycling. Many won't. If they do, they probably require you to clean them first.

2. Divide your perennials and use the pots to share them in.

3. Place a ball of twine inside, and insert the end through one of the holes in the bottom. No more tangles!

4. Use them for Hypertufa pot molds

5. Take them to the beach, they make great sandcastle forms!

6. Use one as a basket to collect your garden bounty. The holes make for great drainage, so you can wash them in there too.

7. Use plastic cell packs to start your seeds for next year.

8. Offer them up on Freecycle.

9. Bury in soil to create a sub-irrigation system for raised beds and planters. I love this idea!

How do you resuse your nursery pots?
Posted by Unknown at 12:46 PM 7 comments:

The Gardens of Downtown Geneva

Last week, we joined a neighbor family to take the kids for a ride on the Metra to downtown Geneva. We've both got one-year-olds, and they'd never ridden on a train, so we decided to make a day of it; do some shopping, and have lunch. Geneva puts on a good show when it comes to gardening. If you've ever been to Gardenology, you know this town takes gardening seriously! Take a look! 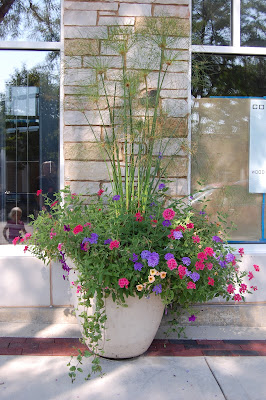 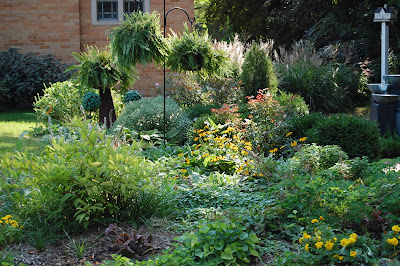 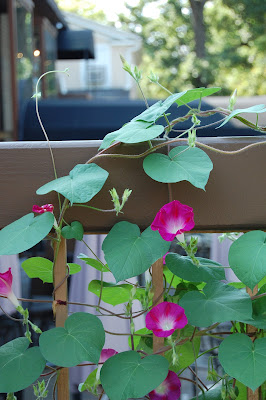 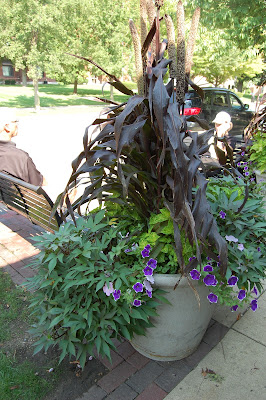 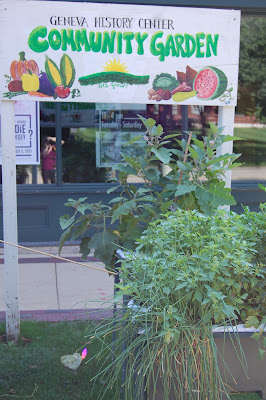 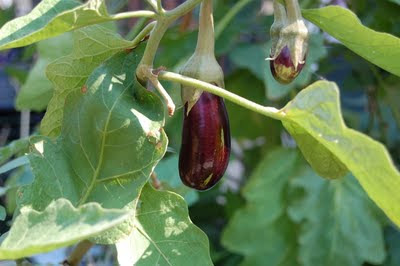 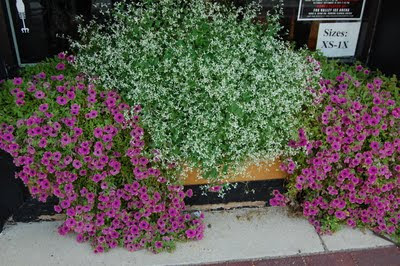 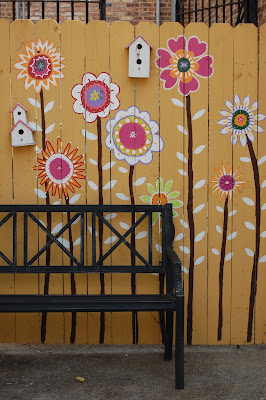 If you go, you've got to visit The Mossy Twig (31 S. Third Street). It's a nature-inspired gift shop run by the owners of The Pure Gardener. I could have done some significant damage to the checking account in that store. I saw this sculpture of two "leaf sprites" by artist Nana Thebus, and had to have it. It immediately reminded me of the kids. Now I just have to find the perfect spot to hang it. 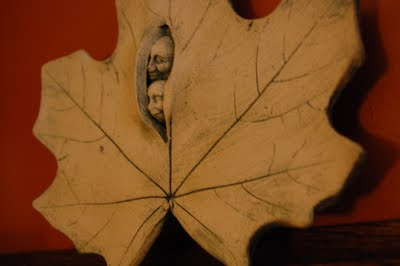 Posted by Unknown at 8:00 AM No comments: 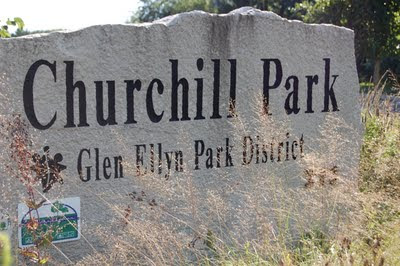 Churchill Park (721 St. Charles Road, Glen Ellyn) is not a typical recreational area. No swingsets or sandboxes here. What you will find is Glen Ellyn's only natural growth property, with over 23 acres of forest, prairie, trails, and boardwalks. 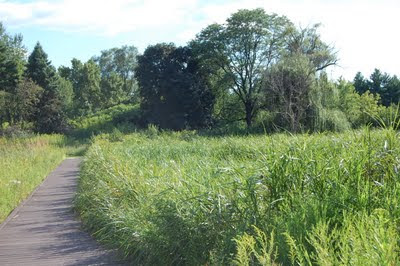 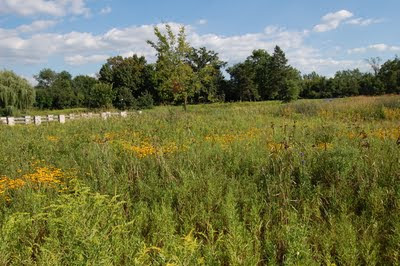 Native plant enthusiasts will delight in the hundreds of species of native plants, and many of them are in bloom today. Take a look at what I saw, then plan your own visit to look for species that I missed!

﻿Here is a fantastic way to create long-lasting garden bed edging, while keeping trash out of the landfill. Using your empty wine bottles in the garden adds color, interest, and whimsy while providing a nice clean edge to your beds. Remember my visit to the lovely gardens of my friend Shawna Coronado? I snapped the picture below in her potager, then saw some nice bottle edging at Cantigny in Winfield. I had to have one of my own.

Luckily, my family drinks a lot and had lots of bottles to give me (just kidding, family! Love you!). I used instructions from Shawna's blog  to start the path. Now I just need more bottles! 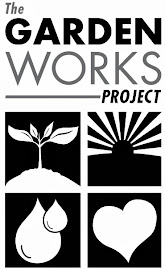